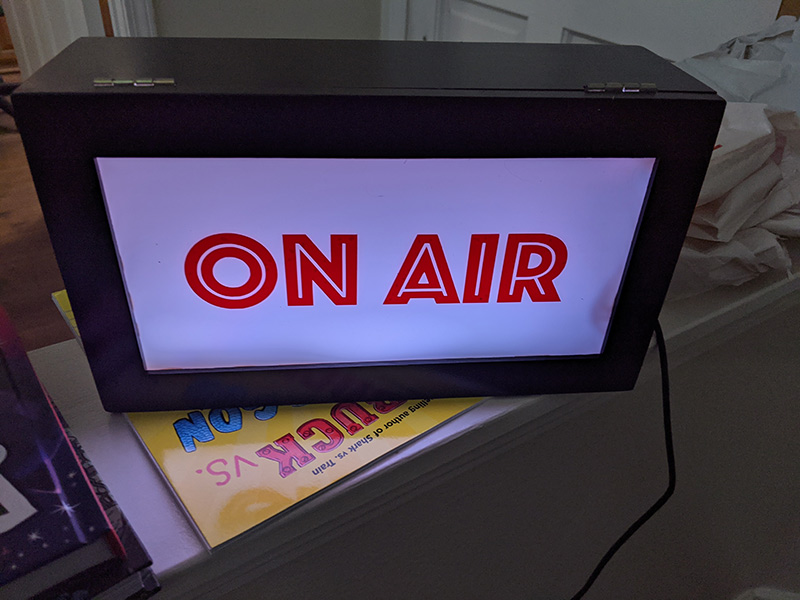 Working from home during the pandemic has presented some unique challenges for my family. Lately the kids (and occasionally my wife) will interrupt me while in a meeting. I wanted some sort of way to indicate to them that I was in a meeting. Being an amateur radio operator, I thought an “on-air” indicator light would be fitting. I wanted to be able to control it remotely. I looked around online to see if there was one that would fit my needs, thinking I could use a smart switch to turn it on/off. About the cheapest I could find a light was about $60, and that did not include the smart switch. I decided I could build one instead for about half that price utilizing components I had on hand.

I had the rpi, wifi dongle, level shifter, USB OTG adapter, power supply, and LEDs in my parts bin left over from various other projects, so all I had to buy was the tea box and white acrylic.

I pulled the dividers from the tea box and used a chisel to remove the wood strip holding the clear acrylic in the lid. I then cut a piece of white acrylic to the same size. I disassembled the box, primed and painted it black. I reassembled everything, using a little wood glue to hold the acrylic into the lid of the box. My wife has a Cricut, so I designed a sticker and had her cut it out of red vinyl.

Wiring everything up is pretty easy. Adafruit’s tutorial outlines how to wire it all up.

I then moved on to writing some code. I created a python script that watches for a file to be present on the filesystem…if the file is there, it turns the light on. If the file is not there, the light is turned off.

I then wanted an API. I built a simple server in Go. The API is really simple…a GET to /on will create the file in the location that the python script is watching. A call to /off will remove the file, if it exists. I build a small UI with buttons to turn things on/off as well: 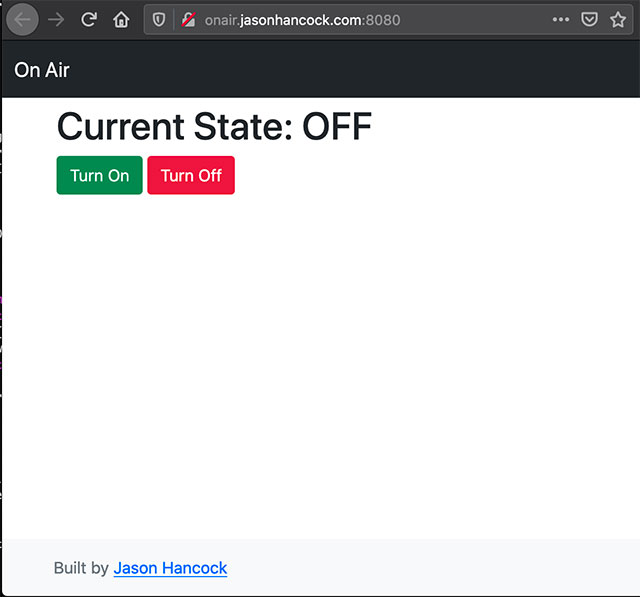 I set it up and explained to the kids and my spouse that if the light was on, I was in a meeting and only should be interrupted if it was something that needed to be immediately addressed. It worked well for both them and me. The only problem was I had to remember to manually turn it on/off. I put a couple of shell aliases to execute the curl calls to hit the API to make it simple to turn it on/off, but I really wanted a way to turn the sign on/off whenever I was on a zoom meeting.

My current machine is a Mac. I noticed when I was in a zoom call, there is an application called cpthost.app that runs, so I can just periodically poll and see if that app is running turn the light on or off. I wrote a little go program called onzoom to do this, but I didn’t want to have to start this up every single time I booted my computer. I used Automator.app to build an app that runs as a startup item that then executes my onzoom program, so now every time I log into my machine it’s automatically running in the background.

All of the code and the artwork can be found on Github.